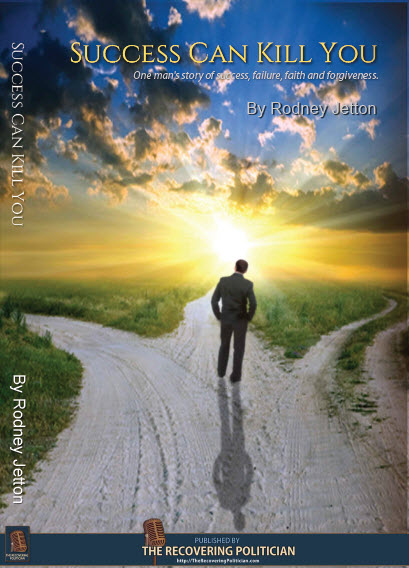 Former Missouri Speaker, Rod Jetton, tells in his new book released this month how success almost killed him.  The book targeted to driven leaders, points out how pride, flattery, bitterness and paranoia can have terrible consequences for those in charge of large organizations.  Using personal examples, Rod warns readers about the dangers of letting success go to their heads.  The publication was released by The Recovering Politician Publishing House and is available online or by paperback through CreateSpace at https://www.createspace.com/4694555 or Amazon at http://tinyurl.com/kt3aohr  or Barns & Noble at http://tinyurl.com/k4so3b8

The book chronicles Rod’s meteoric rise from a young Marine officer to the second youngest House Speaker in Missouri state history. His political success made him a powerful force in the Republican Party and he was on the fast track to becoming Governor of Missouri, when his personal life exploded in a very public and humiliating fall.

On December 7, 2009, he was arrested for felony assault after a one-night stand with a woman he connected with on Facebook. Soon after that, he received a call from a former girlfriend telling him she was pregnant and he was going to be a father at the age of 42. Then, just a few weeks later, Rod found out he was the target of a grand jury investigation from his handling of a bill when he was Speaker of the Missouri House.

Rod’s candid way of explaining his mistakes and pointing out the dangers of putting his career in front of his faith and family will be of great benefit to politicians, businessmen, church leaders and corporate executives focused on accomplishing their goals. The Recovering Politician’s founder, Johnathan Miller added, “Rod’s ability to identify the early warning signs of pride, bitterness and paranoia in his life are exactly the type of cautionary advice anyone who is experiencing success needs to hear. He does a great job of keeping the reader’s interest with forthright stories, useful illustrations and sound advice. Thoughtful leaders would be wise to read this book and heed the warnings gleaned from his mistakes.”

What others are saying:

“There is not a more compelling story of the reality of politics that I know.  I knew Rod throughout this time and am thrilled he has decided to share his story. It is courageous.  As power and money consume more of our body politic, this will be one of the most important reads of our time.  If you know someone who has run, or who might ever run for political office, “Success Can Kill You” is the best contribution you could make to their campaign.” – Author and Fox news commentator, Dr. Gina Loudon

“Every bullet proof type A leader should read this book.  I have known Rod for years and I watched his amazing rise to power, devastating fall from grace and subsequent heartwarming recovery.  Why not avoid the fall by heeding his warnings.  Type A personalities tend to think they can avoid the tragedy others face, yet so often the very traits that bring success can also cause failure.  If you’ve failed, Rod’s story proves there is life after a fall.”- Ray Rowland, Pastor of Sweet Prospect General Baptist Church

Click this link http://therecoveringpolitician.com/contributors/rodj/exclusive-excerpt-rod-jettons-success-can-kill-you to read an exclusive excerpt from chapter 10 highlighting Rod’s arrest and realization that his success had taken him down a dangerous path and changed him into someone he really didn’t want to be.

For more information about Success Can Kill You or Rodney Jetton, please contact Johnathan Miller at Jonathan@SecondActStrategies.com or Rod Jetton at r.jetton1@gmail.com